Up to 4 Weeks Free on Select Units 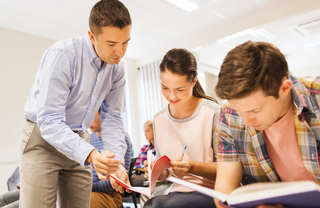 Here’s some news that should have everyone at the apartments in Alameda jumping for joy (well, those of us with kids, anyway); The town’s Alameda High just made US News & World Report’s 2019 listing for the Best High Schools in America:

“Alameda and Encinal are among the best high schools in California, U.S. News & World Report said Tuesday in its most comprehensive ranking yet of the nation's high schools. More than 17,000 schools are ranked, an increase from 2,700 last year.”

Out of those 17,245 schools that were ranked, Alameda High ranked 151st on the in-California rankings, and 998th on the National rankings. Out of a sample size that large, that’s definitely encouraging news, worthy of further exploration! Since you asked, we figured we’d deliver, and delve into Alameda High’s placement on the list, and what makes this school stand out among the rest.

What the Rankings Show

First, let’s break down that US News & World Report ranking, shall we? According to US News & World Report’s editors, they’re firm believers in the idea that “high schools are among America's most important institutions,” hence, their motivation for making the list. In ranking schools, they took a look at several factors, breaking them down into percentages of the overall school rankings:

US News & World Report then performed some normalization, weighting, summing to arrive at percentiles for schools based on their rankings:

“The six indicators were first normalized using standardized scores and then weighted, those weighed scores are then summed and transformed so that each eligible school receives an overall percentile score between zero and 100 at two decimal places, with the top performer scoring 100.”

And how did Alameda High School rate on these various factors? Here’s how Alameda High stacks up in the numbers:

What’s more, when it came to test scores in Math and Reading, Alameda High outperformed both district and California State medians, showing that the students here, when it comes to test time, at least, might have a better understanding of the material than many of their peers. As for Encinal High, here are the numbers:

There are a few more important details to note about how US News & World Report gathered and calculated their info for these rankings. The first is that did not collect any data directly from the high schools in question. Instead, they used a variety of third-party sources, which included The Common Core of Data, Statewide math and reading level assessment tests and high school graduation rates, The College Board, and International Baccalaureate.

It’s also important to bear in mind that US News & World Report’s new methodology is a departure from previous ranking lists. They’ve expanded their state-level rankings, magnet school rankings, and charter school rankings, and added more than 2,700 high schools to the list, making the field more competitive than before. At the same time, they have now employed a simpler and more comprehensive formula to arrive at their rankings, and, in their words, now show a “far broader spectrum of how all high schools compare and give users a more complete picture of choices in their communities.”

With all that in mind, take Alameda High and Encinal High’s placement on this new list as what it is, an indication that the school is performing well and regarded as one of the top high schools not only in California, but across the nation.

More About Alameda and Encinal High

Now let’s look at Alameda High and Encinal High specifically, and some of the factors that might have contributed to their spots on the rankings.

Located on Encinal Avenue, Alameda High has about 1,746 students in total, along with about 100 faculty members, putting its student-teacher ratio near 23:1. Similarly, Encinal High, over on Central Avenue has a reasonable student-teacher ratio of 20:1, with about 1,042 students and upwards of 60 faculty members. These ratios are key in success and performance, as fewer students per teacher increases the likelihood of students getting the attention they need to help them in class.

These numbers aren’t the only factor that may play a role in Alameda and Encinal High’s success, though. Remember that both are a part of the Alameda community, and that community atmosphere can hold a large sway over facets like how the environment at school is on a daily basis. Alameda, for its part, is a small and laid back part of The Bay, with a relatively low population (around 73,812), and a kind of local charm that goes a rather long way. Add to that the diversity of these schools (both have a good mix of African American, White, Asian, and Hispanic students), and you’ve got a recipe for a harmonious school environment where the focus is squarely on learning and success.

The Apartments in Alameda Are a Great Place for Family

Last, but not least, this news is suggestive of something we’ve been saying for a while — Alameda communities like Admiral’s Cove are a great place for family, and overall, just a great spot to be in The Bay. You’re close to the action, but you’re also outside of the grinding hustle and bustle. To top it off, you’ve got these spacious, perfectly designed residences that make life comfortable during those downtime moments. What setup could be better? You’ll be hard pressed to find one, so be sure to check out what Admiral’s Cove has to offer and consider this your new location for Alameda living done right.