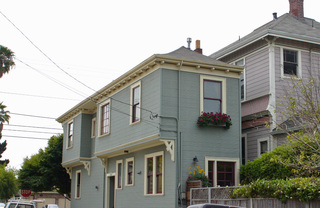 What’s the craziest thing you’ve done when someone made you angry? Most people would probably answer that they’ve said something out of spite, but could anyone make you angry enough to build a house out of spite? That’s exactly what happened with a home in Alameda in 1938. From Admirals Cove, you’re a quick trip away from this rare oddity.

What is a “Spite House?”

A house of spite refers to fences or just houses themselves that a land owner built with malice, or spite, against a neighbor. The home is constructed as a weapon, one that is meant to forever annoy the other party. It’s supposed to be an eyesore, a thorn in their side, and an all-around nuisance.

Sometimes these homes are built to annoy city officials or simply block a neighbor’s sunlight. Because of these spiteful reasons for building them, they often aren’t the most practical looking homes in the world.

While these homes aren’t incredibly common (people tend to build fences out of spite, not homes), you can find them around the world standing as a testament to the sour nature of their former owners. There’s one right here in the San Francisco Bay at Alameda.

The History of the Spite House

This awkwardly placed home was built for two reasons. First, the owner wanted to harass the city of Alameda for taking a chuck of his land away to accommodate for expansion. With the intention of building a new street, Alameda removes some of Mr. Charles Froling’s property. He was, clearly, less than thrilled.

Before the shift in property ownership, Froling had recently inherited the land from a deceased relative. His plans were to build the home of his dreams on the property, having a place to live the rest of his life right here in the bay. When that fell through, he was determined to fight the city. However, he needed help.

Froling turned to his neighbor but found no sympathy. No one else’s plans for houses would be affected, so the neighborhood cared little about this loss of land or his thwarted dream. So, Froling did the only rational thing he could think of. He decided to get revenge.

Using the small amount of land left to him by Alameda, he constructed a nightmare home out of spite for the community. Froling got to work, building a home 20 feet high, 54 feet long, and a mere ten feet wide.

The end result is a beautiful green home that looks as though it was cut in half. It sets as close as possible to the house behind it, nearly blocking the front door and stopping any sunlight from entering that side of the building.

The home is, otherwise, gorgeous. Its accents and design make for an adorable and welcoming appearance when viewing the building from the front. Froling put a lot of hard work into making his street view of the home look as nice as possible (and as close to the sidewalk as legally allowed).

Froling spent an equal amount of time ensuring the dimensions for his home would be as problematic as possible for the city of Alameda and his unsympathetic neighbor, though. This building brushes up on the hair-thin property lines in every direction. Today, however, the house is less about Froling’s spite and more of a hidden treasure.

You won’t find a home like this built anymore. Modern zoning and construction codes imply forbid it, but the Spite House stands as a testament to what angry people were capable of in a time not so long ago.

Today, people come by the spite house with a smile on their faces as they hold back a laugh at how ridiculous the dimensions and spacing of this building look. The building has been grandfathered into the city, allowing it to remain in-tact as the oddity it is and was in 1938.

Believe it or not, the home is still occupied to this day. The home is rented out like any other residence in the area, though it has been sold as a home in the past. It last sold in 2011 for $380,000 despite only covering 1,316 square feet. It does, however, have two bedrooms and two bathrooms.

Alameda’s angry little house isn’t the only one of its kind. Boston’s Skinny House is another popular spite-filled building. It sits squeezed between two apartment buildings, standing from one brother’s angry attempt to block the light entering the other’s home.

Alexandria, Virginia has a similar home to the one in Boston. It sits between two homes now, but was initially constructed in 1830 to block foot and horse traffic that kept the owner awake at night in his adjacent home.

In Kensington, London, a homeowner’s renovation plans were rejected. Here revenge was simple, she painted her house in candy cane stripes to annoy everyone on the block. The worst part is that she left the final stripe incomplete to really get on people’s nerves. While spite homes are rare, they aren’t as uncommon as you might think.

There are no odd dimensions or spite here. Admirals Cove is your launch and landing point in the Bay Area. Whether you’re heading out for the day or anchoring yourself comfortably at home, you’ll discover the charm of open living with space to relax and a place to roam.

Hop on a ferry to enjoy a bistro lunch at Fisherman’s Wharf, ride the rails to Jack London Square for a shipping trip, or entertain your neighbors with a few rounds of bocce on acres of manicured green. Hang out with friends in your own backyard as you take advantage of a carefully curated selection of amenities designed to elevate your sense of living.

Complete with modern finishes in every home, your return to relaxation is encompassed in envious designs that wrap you in the comforts of a contemporary home. Step outside your front door to find the vibrant, coveted community of Alameda along with Oakland just minutes away. With easy commutes for work and play, San Francisco and beyond are all within your reach.