Up to 6 Weeks Free!* Limited time offer - Call for details! 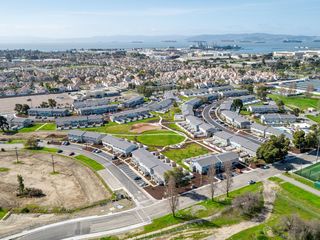 Alameda Point has an important place in US history and has a long been a location of Naval activity, shifting to adapt to new eras of war or peacetime. In the 90s, the area was partially decommissioned and land was studied for development use. Now, the area is considered one of the last places for big development in the Bay Area. This history, in fact, inspired the name of our apartment and townhome complex. By living at Admiral’s Cove, you are not only living in a historical community, but you are part of an exciting time of growth and vision for the future.

Where is Admiral’s Cove?

Admiral’s Cove is located just across the harbor from Jack London Square, a short walk from the ferry terminal that can take residents to major hubs like downtown San Francisco in just 30 minutes.

This area, Alameda Point, was for about 50 years a location for being home to a Naval station that primarily dealt with aircraft maintenance and repair. Where Admiral’s Cove is located was known as “North Housing”, and Navy employees — including officers — and their families lived in the townhouse complex to remain close to the station.

In order to create Admiral’s Cove, these homes were redeveloped with modern interiors and amenities. The community was reimagined to adapt for modern ways of living for everyday Americans. We made sure to include green space for outdoor activities and a fitness center. The homes all have front porches, private backyards with storage, and luxury interior features like quartz countertops and laundry rooms.

Alameda Point was established as a Naval Air Station in 1941, and was part of the Assembly and Repair Department. Their first repairs happened in January of that year, and by the time one of the most significant events of the war — the Japanese attack on Pearl Harbor — occurred, the station employed 2,000 personnel and were repairing 14 aircrafts a month. By the end of the war, the station employed 9,000.

The station also played an important role during the Cold War. During this time, the station’s capabilities related to aircrafts expanded significantly. The station became a part of efforts to adapt to modern technology, which involved adapting propeller-driven aircraft and introducing modern jets as vintage planes were retired.

In this era, the station at Admiral’s Point become the Navy’s largest aircraft component repair site. Tens of thousands of units came through the site for important repair and maintenance.

Eventually, the Navy determined that their aircraft repair capabilities were in excess. As a result, Alameda Point was downsized and a multi-decade project for repurposing the land was put into place.

It was a long time before redevelopment took place: a plan had to first be made, which took a few years. Then began an effort to identify and clean up toxic sites. Multiple entities, including regulatory agencies and consultants helped determine sites of radiation, petroleum, and more that needed to be resolved in order for repurposing to take place. The cleanup is now about 75% completed.

In the 2010s, the land was parceled off to The City of Alameda and The VA. A historic district was established, which contains over 90 buildings which will be preserved. The City of Alameda has created an infrastructure plan for the land parcel, which includes zoning for employment use, housing, parks, and Bay Trail expansion. Admiral Cove is part of the city’s housing plan for this new land at Admiral Point.

The goal for total completion of redevelopment is 2035.

Sources for this post include Alameda Point Info and Alameda Naval Air Museum.