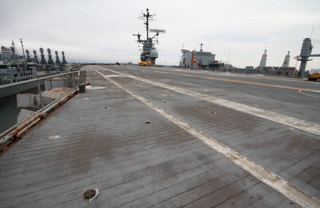 While it might not be something you think about every day, living in the apartments in Alameda puts you close to the water, and, as a consequence, close to some pieces of American Naval history that are too tempting to pass up, like the USS Hornet. This Essex-class carrier turned waterfront museum is moored at the former Alameda Naval Air Station, and now serves as a prime location to take a trip into the country’s military and spacefaring past/future:

“Aircraft Carrier Hornet Foundation preserves and honors the legacy of USS Hornet, a national historic landmark, and its role in naval aviation, the defense of our country, the Apollo Program and exploration of space. The USS Hornet Sea, Air & Space Museum connects the greatest generation of Americans with future generations, educating and inspiring them to meet their challenges.”

Ready to check out what awaits aboard the USS Hornet? We can’t say we blame you! Read on, because today, we’ll be filling you in on the history of this fine vessel and its current role as a preserver of both it’s naval and Apollo Program legacy.

History of the USS Hornet

Way back during WWII, the USS Hornet was constructed to aid America’s involvement on the Pacific Front. This wasn’t just any sort of naval vessel, however. The USS Hornet was an aircraft carrier, instrumental in deploying aircraft and serving as a mobile airbase for operations throughout the Pacific Ocean. The USS Hornet we know today is actually a successor to a previous USS Hornet, which was lost in battle. The “new” Hornet, however, fared a bit better than its predecessor, racking up a pretty impressive career during World War II:

“The new Hornet had a distinguished World War II career that included the invasion of Saipan and the Battle of the Philippine Sea, the amphibious landing on Palau, the Philippines, Iwo Jima and Okinawa and strikes against the Japanese home islands.”

Additionally, the USS Hornet (with the inclusion of its air groups) was responsible for taking down “688 planes, destroying another 742 aircraft on the ground, sinking a carrier, cruiser, 42 cargo ships and 10 destroyers and assisting in the sinking of the Japanese battleship Yamato.” There aren’t many other ships that can claim such a distinguished career, but the Hornet wasn’t done after WWII. It was also the vessel that recovered the Apollo 11 and Apollo 12 astronauts following their missions to the moon. It makes sense, then, that the Hornet, now a museum, would include relics from these space missions along with showcasing bits of naval history from WWII and beyond. Speaking of which...

Transition to a Naval Museum

It wasn’t until the late 90s that the USS Hornet became a museum. During that opening ceremony on October 17th, 1998, Buzz Aldrin, former Apollo 11 astronaut, gave a moving speech as the principal speaker, and from then on, this former weapon of war has been a place of learning, displaying a number of aircraft that visitors can come and take a look at, including:

Additionally, some Apollo mission items are on display as well, including:

Now, it’s entirely possible to head to the Hornet during its operating hours and just walk yourself around on a kind of self-guided tour, stopping to look at what you find interesting and ignoring whatever you don’t. If you want more of a complete experience, however, you’re going to want to check out one of the guided tours, which really go into depth about the history and magnitude of various topics.

You’ve got the group tours, for example, which take 15 (or more) visitors through the historic ship and have docents available to answer any questions you might have about the displays. What’s more, there are various add ons that you can purchase for these tours that can enhance the experience, like the “tour at sea,” where veterans of aircraft carriers tell you some of their personal stories from life at sea. There are also flight simulator rides,and a chance to have lunch in the Officers’ Mess.

You might instead want to check out the History Mystery tour, dedicated to answering a very serious question: Is the USS Hornet Haunted? There have been reports of ghosts roaming the vessel, and if you’re brave enough to spend an evening aboard the Hornet, this after-hours tour will let you learn about some of the spooky tales that have made the USS Hornet famous across the nation.

Lastly, there are also specialty tours that are led by volunteers and Navy veterans. These last several hours, and take you to some behind-the-scenes spots aboard the Hornet that you wouldn’t be able to see if you just wandered aboard as a regular visitor. Regardless of how you choose to experience the museum, though, it should be a great time, should you make the visit solo, with a date, or with the whole family in tow!

These Apartments in Alameda Are Right Around the Corner

When you’re at Admiral’s Cove, you’re right in the neighborhood to enjoy hotspots like the USS Hornet Museum. And it’s not just this one attraction that you’ll find conveniently close. Most of the great things that Alameda offers, and even further beyond into Oakland and San Francisco, are easy to get to when you call these stellar apartments home. Comfort, luxury, and proximity to the best of the Bay? What could be a better combination than that? You can take all day to think about it, or, instead, learn more about what Admiral’s Cove has to offer, then take the next step towards becoming a part of this beautiful Alameda community.